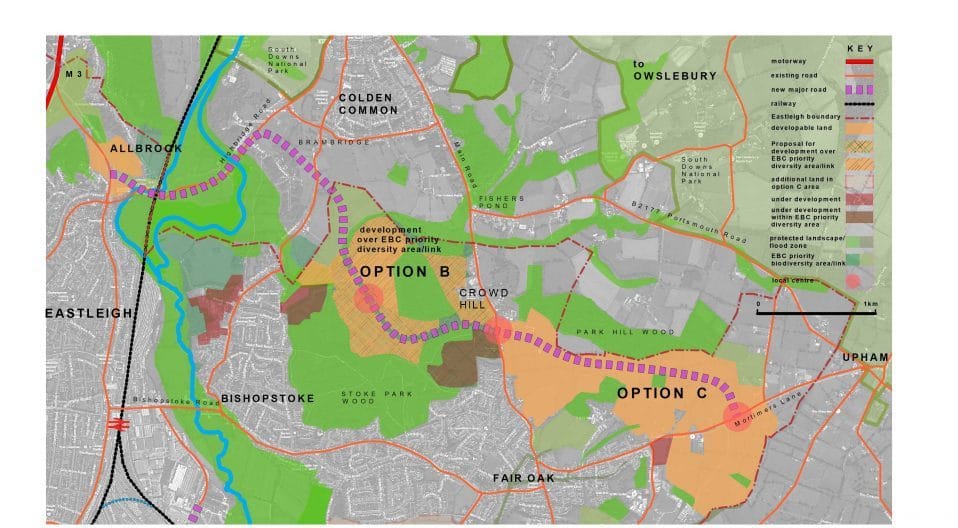 ADD UPDATE, 30 September 2016: Eastleigh Borough Council (EBC)’s cabinet voted on Tuesday to delay their Local Plan process so that it does not go live until mid-2018, at least a year later than originally anticipated.

The cabinet stated, ‘Due to the need to “roll forward” the plan evidence and resulting plan policies and spatial strategy to 2036, a substantial amount of additional time and resources is required. This is necessary to ensure the most sustainable and deliverable locations for proposed development are included and justified in the Plan.‘

The delay is driven by EBC’s need to show their large-scale development plan of over 6,000 houses to be ‘deliverable’ to the Planning Inspector – which means more preparation is required.  The July 2016 Council Paper indicates that a large development should be investigated further – and that only two areas are being considered as locations – North Bishopstoke and Fair Oak (Options B and C) being one; Allington Lane (Options D and E) being the other.

In our view, it may be that Cllr House has realised that he faces organised and strong opposition if North Bishopstoke and Fair Oak is included in the plan.

This means that those of us who support the ADD campaign are in for a marathon, not a sprint.

It also means that Eastleigh is exposed to developers submitting whatever they want between now and 2018 as there is no Local Plan.  In theory, failing to get the Plan done by Spring 2017 means that the Secretary of State could opt to take the plan over – but we believe that this is unlikely.

Several ADD campaigners attended the meeting – and we exercised our right to record it as we are concerned that EBC official minutes do not detail debates or the content of public representations.

Cllr Airey said that he hadn’t realised it was ‘such a beautiful area’ and that it was ‘smothered with many footpaths’ – until he had walked through it with Rob Byrne.  Sadly, Cllr Airey’s remarks were not minuted! We hope that more councillors will take up Rob’s invitation for a guided walk so that they can see why we are so convinced that the North Bishopstoke and Fair Oak development is such a destructive idea.