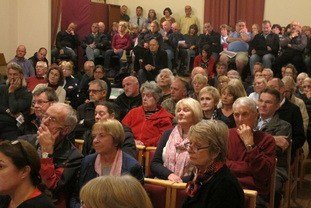 ADD UPDATE, 20 October 2016: More than 200 Bishopstoke residents crammed into the local Methodist church on 17 October for a meeting called by ADD, opposing plans by Eastleigh Borough Council to build an extra 6,500 homes in the area.

Gin Tidridge of ADD told the meeting: “Unless we do something, we’re going to lose what makes this area special, and I feel passionate about that.”

One ADD supporter, Rob Byrne, said the Council’s plans threatened outstanding countryside and woodland and would destroy the gaps separating individual communities. “We’re not a suburb of Southampton, and we don’t want to become one,” he said, to thunderous applause.

The proposals are set out in the Eastleigh development plan, published for consultation by the Council last December. Although ten options were initially under consideration, protesters believe that Council leaders have long privately favoured options B and C, involving big new developments in North Bishopstoke and Fair Oak as well as a major new link road. The additional housing would be equivalent to two new towns the size of Bishop’s Waltham.

The meeting heard a message of support from local MP Mims Davies, read by her assistant, who said on her behalf: “I completely oppose Options B and C. I will continue to stand alongside Action against Destructive Development.’ Neighbouring MPs Steve Brine (Winchester) and George Hollingbery (Meon Valley), whose constituencies would be affected by the plans, are also backing the campaign.

One of the biggest cheers of the evening came when a member of the audience said he was “shocked” that none of the four borough councillors for Bishopstoke had accepted invitations to attend. “They’re supposed to be representing our interests, but [aren’t listening] to our views,” he said.

“The silence from Bishopstoke’s councillors has been deafening,” added Mr Byrne. Several other speakers called on their local representatives to engage with the community in discussing the plans.

ADD member David Ashe told the audience the proposed new link road from Mortimers Lane to Allbrook would not work as a bypass, and was not costed.

There were also complaints that Eastleigh’s proposals do not make sufficient allowance for vital infrastructure such as surgeries, schools, water and sewerage.

Options B and C generated nearly 600 objections – far more than all other options combined – when the Eastleigh development plan went out to public consultation. Opponents include the Woodland Trust and the Campaign for the Protection of Rural England. ADD agree that Eastleigh needs new housing, but argue that there are more suitable, more accessible and more environmentally friendly sites available in the borough.

The meeting’s organiser, parish councillor Gin Tidridge, said she was delighted with the turn-out and interest shown by local residents. Although extra chairs were found to accommodate those who wanted to take part, there was standing room only for late arrivals.

‘I hope the level of interest and strength of feeling shown tonight will persuade the council to look seriously at our ideas,’ said Mrs Tidridge.

Your ticket for the: ADD UPDATE: 200+ Bishopstoke residents cram in to 17 Oct ADD meeting