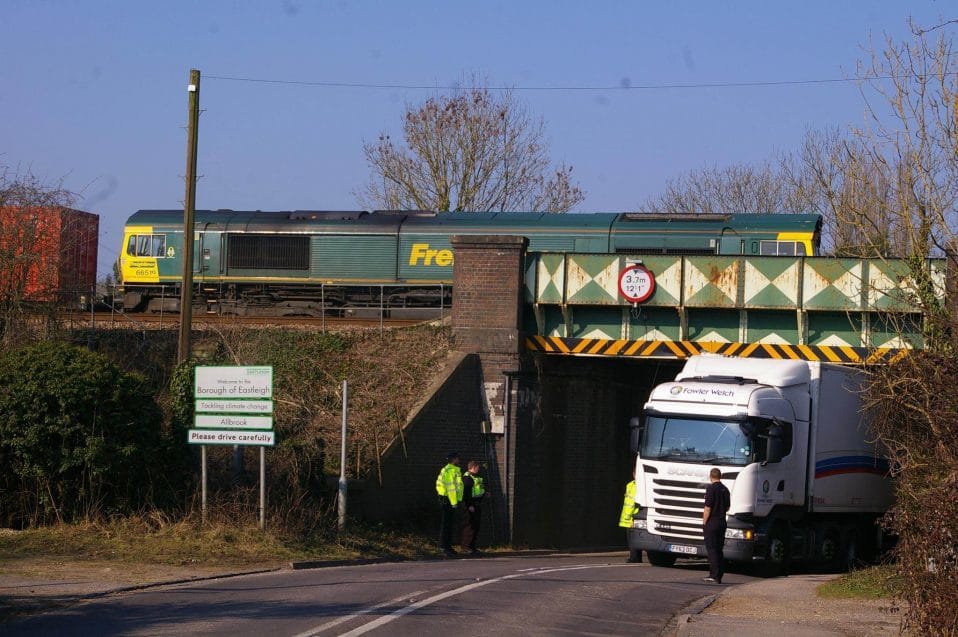 ADD UPDATE, 12 December 2016: An Eastleigh Borough Council (EBC) infrastructure report updating councillors on the viability of options for its Local Plan reveals a multitude of reasons why councillors will be swimming against the tide of evidence if they decide to pursue options B and C – in Allbrook, Bishopstoke and Fair Oak – at its crucial council meeting this Thursday.  Significantly, buried at the back of the report (pp 17-18), is a new reason: Network Rail’s potential right to share in the massive profits of the scheme, which – if true – would likely blow it out of the water.

Amongst numerous infrastructure-related obstacles, the report majors on problems associated with the proposed North Bishopstoke ‘link road’, which would carve its way through glorious countryside to accommodate the estimated 30,000 extra daily traffic movements resulting from the planned 6,000+ houses in the scheme. In particular, the report focuses on the tiny Allbrook railway bridge, under which this road would have to pass and which – as local residents have been saying ad nauseam – is totally ill-equipped to cope with the massive increase in traffic.  As the report admits, the bridge is not only prone to substantial flooding, but also too low (“there have been 18 ‘bridge strikes’ since 2008″) and too narrow (“HGVs generally give way to each other if two are approaching the bridge at the same time” causing “delays on the approaching links”).

Critically, neither Hampshire County Council, as the highway authority, nor Network Rail have been prepared to give EBC assurances that they would sanction the plans for the new road.  As the report states: “Further work will be required… in terms of technical delivery; safety for road and rail users [from, for example, ‘bridge strikes’]; and potentially significant additional costs impacting upon the viability of the proposals.”

Indeed, on this last point, discussions with Network Rail have highlighted a potential showstopper.  According to the report, Network Rail could have the right to a share in profits from the whole development if works to the railway bridge make the scheme viable.  “This could result in a significant value being due to Network Rail which could significantly impact upon the viability of the development option,” says the report.

A spokesman for the group Action against Destructive Development (ADD), which strongly opposes options B and C and is urging the council to favour far more sustainable proposals in Allington Lane, said: “This report provides yet further reasons to question why on earth EBC is so keen on pursuing options B and C.  On numerous measures, the plans just don’t stack up.  Extraordinarily, though, councillors are set to commit huge sums of additional tax payers’ money on Thursday to try and square the circle. It’s simply not possible.  Ultimately this will be proven, but at substantial cost to the council’s reputation and already-stretched purse.  The proposals in Allington Lane are both sustainable and deliverable.  We want new houses and the council has a workable plan right under its nose – let’s hope councillors smell it soon, before it’s too late for them and their electorate!”

Your ticket for the: EBC infrastructure report admits to serious obstacles to options B and C