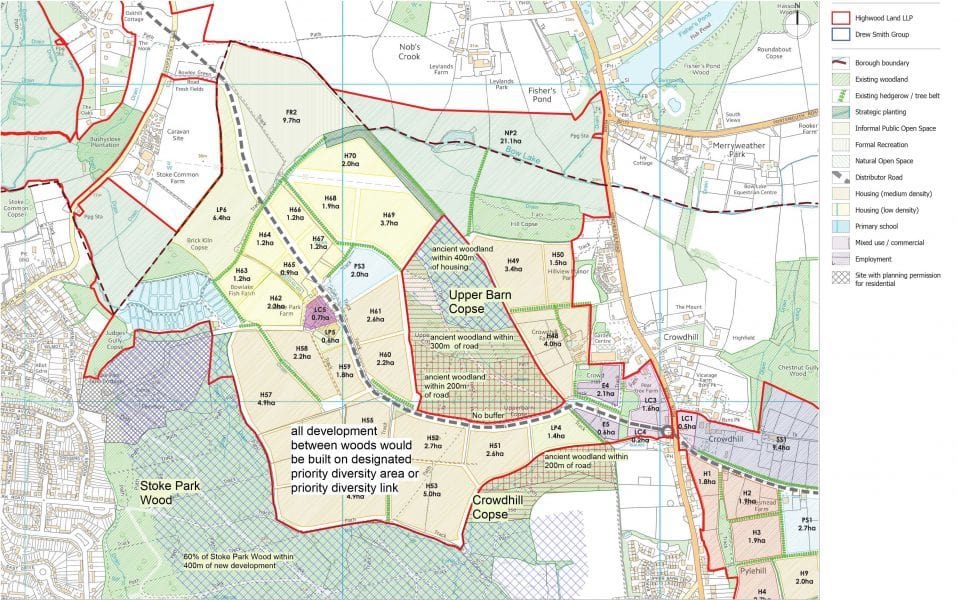 ADD UPDATE, 10 March 2017: At Eastleigh Borough Council (EBC)’s full council meeting on 15 December last year, Keith House, EBC’s leader, told the 300+ local residents present: “[I want to pick up on] one comment, which is the suggestion that has been made by some that this council would destroy ancient woodland [woodland that has been in existence since at least 1600] at Stoke Park Woods or Crowdhill Copse – absolutely not. This council, I am confident, will not see the disruption of any ancient woodland [even] if we were to progress ultimately with any development at Bishopstoke/Fair Oak [so-called options B and C of the council’s emerging Local Plan]. So these things matter… when developers come to us saying you’ve got to have houses between two sets of woodlands, we will quite rightly turn round and say: “No, you can’t do that. That doesn’t work in terms of the environment and the protection of… the community.”

Several other councillors, including Councillors Vickieye Parkinson-McLachlan, Trevor Mignot, Margaret Atkinson and Derek Pretty – not to mention Martin Hawthorn, the agent for the developer Highwood – also pledged to protect the area’s ancient woodland. Councillor Parkinson-McLachlan told those present that “it is incumbent upon us to preserve those woodlands intact with the whole variety of wildlife that we currently see and which makes us so special”, while Councillor Atkinson said that failing to do so would be a “travesty”. Summing up, Keith House also said: “We need to be very clear: there are no proposals from anyone to destroy ancient woodland, and I hope that everyone in the room, everyone understands that and takes it on board.”

In the last couple of weeks however, the Woodland Trust has reiterated its deep concerns relating options B and C of EBC’s Local Plan, namely the proposed development of 6,000+ new houses and a major new road at Allbrook, Bishopstoke and Fair Oak. If EBC chooses these proposals, currently its favoured options, the Woodland Trust believes it will be “hugely damaging” to two of its ancient woodlands, Upper Barn Copse and Crowdhill Copse, between which its proposed new road would be built – see our annotated version of the developer’s map above.

Moreover, as the map shows, the developers are saying to the council that they should “have houses between two sets of woodlands” (not only between the Upper Barn and Crowdhill copses but also between Upper Barn Copse and Stoke Park Wood, another ancient woodland owned by the Forestry Commission), so, if Keith House is true to his word, presumably he will now “turn around and say: ‘No, you can’t do that’”? (Given the woods and the fields between them are designated by the council as priority biodiversity areas/links, it seems extraordinary he hasn’t said this already – but that’s a different story).

The Woodland Trust noted in a 2012 report that “only 12% of the [UK’s] landscape is native woodland, and of that only 19% is classified as ancient woodland.” It is therefore not surprising that the Trust is concerned.  Alongside hundreds of other individuals and organisations, it made strong representations against options B and C during EBC’s consultation period at the start of last year but in recent comments, Oliver Newham, the Trust’s senior campaigner for ancient woodland, has emphasised how the development will be “hugely damaging”, adding:

“The Woodland Trust is extremely concerned about proposals that could see thousands of houses built close to areas of ancient woodland near Bishopstoke. Ancient woods are hundreds of years old and act as havens for wildlife. They are very sensitive to change, each one unique and irreplaceable. Ancient woods need properly protecting from the impacts of development. We are particularly concerned about the prospect of a road being built between two of these woods, Upper Barn and Crowdhill copses. Any road between these woods would sever important wildlife corridors and further isolate the woodlands from each other. The woods would also be exposed to increased noise, light and other damaging impacts. We would urge those that love woodlands, particularly those with local experience of these woodlands, to do (and carry on doing) everything they can to convince decision-makers that these woods need protecting, not polluting.”

Given that the gap between Upper Barn Copse and Crowdhill Copse is approximately 175 metres, and all of the woods will be within 400 metres of the proposed development (see map), we cannot see how EBC would be able to build its proposed new road and housing without ultimately destroying the ancient woodland. Even if the road was realigned to run down the centre of the gap between the two woods, the maximum buffer possible would only be 83 metres. Martin Hawthorn, the developers’ agent, talked about the need for “substantial buffers”, but obviously there isn’t the room.

Given the clear promises made by Keith House and several of his fellow councillors to protect ancient woodland, surely this makes it a showstopper?

To support ADD in our campaign against options B and C, please offer your services, donate to the cause or simply join our Facebook group.

To find out more about the Woodland Trust and how to save Britain’s ancient woodlands, click here.

Your ticket for the: Mind the gap: Woodland Trust delivers blow to Eastleigh council’s options B and C