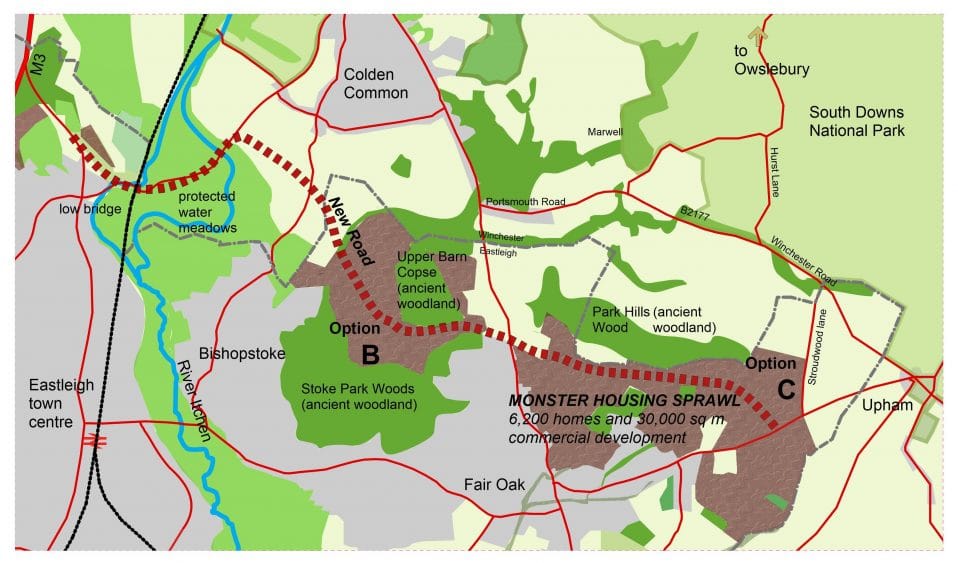 ADD UPDATE, 17 July 2017: Ahead of Eastleigh Borough Council’s critical meeting this Thursday, 20 July, to decide on its Local Plan options (at which we hope to see as many of you as possible – details here), ADD has today put out the following press release:

The emerging Eastleigh Local Plan is destined to fail when it comes before the planning inspector unless there are substantial modifications, Action against Destructive Development warns today.

The latest version of the plan, published last week and due to be discussed at full council on Thursday, contains inconsistencies, misleading statements and vast gaps in evidence.

The plan would involve the building of more than 5,000 homes on the outskirts of Fair Oak and Bishopstoke – so-called Options B and C – and a new £40 million road linking the development to the M3. The council’s report admits that the proposed options contain as many as eleven weaknesses, yet makes no attempt to address them. And there is no word on how the council, already heavily in debt, expects to fund the road.

Whilst accepting that new housing is needed, ADD argues that the council has chosen the worst possible place in the borough to build it. It also believes the proposed new road would add to congestion rather than alleviate it. The plan is opposed across the political spectrum, by all three local MPs, by conservation bodies such as the Campaign to Protect Rural England and the Woodland Trust, by angling, Church and medical organisations, by planning experts and local parish councils. The TV naturalist Chris Packham has described it as “Eco-vandalism”.

“The leadership of Eastleigh Borough Council is totally isolated on this issue,” said Deborah Mitchell of ADD. “This is a classic case of starting with a policy and then trying to find the evidence to justify it. Well, the evidence just isn’t there. The environmental damage to sensitive locations, especially nationally important sites such as the ancient woodland and River Itchen, would be little short of catastrophic. The borough would also lose its finest open countryside, whilst the proposed new road would add to congestion, instead of alleviating it.”

ADD believes the consultation exercise so far has been a sham, but that there is still time for the council to consult with interested parties and get a result that would benefit the whole of Eastleigh.

“The current version of the plan is destined to fail – and that will leave planning policy in a complete mess. The Local Plan should provide a great opportunity to add to the borough’s vibrancy, but all we have at the moment is a proposal to create vast urban sprawl and wreak damage on the environment,” said Ms Mitchell.

To watch a 13 year-old’s video on what’s being planned, click here.

Your ticket for the: Eastleigh’s Local Plan is unachievable – ADD urges inclusive discussion of evidence to avoid plan failure