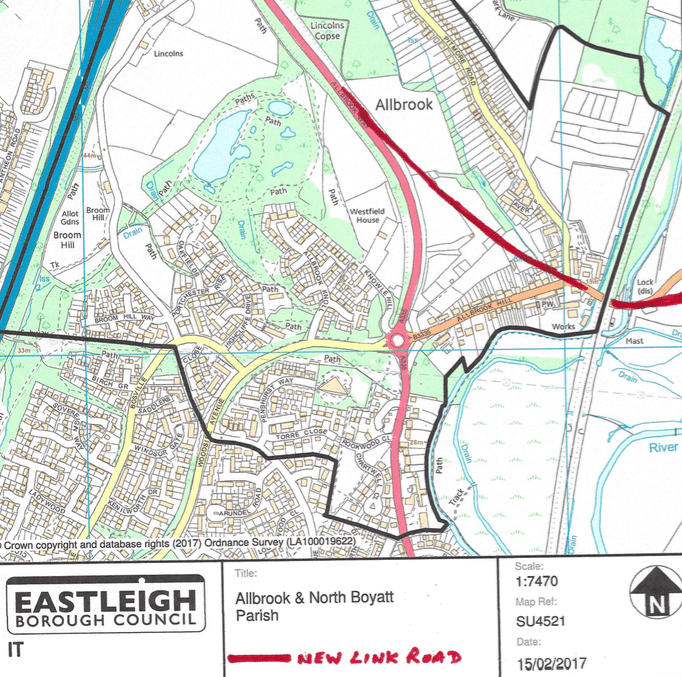 Although the Eastleigh Local Plan is still theoretically out to consultation, it is obvious that Eastleigh Borough Council (EBC)’s leadership has always favoured a development of 5,000-6,000 new homes north of Bishopstoke (options B and C). Instead of genuinely considering all the options on the table, they are frantically trying to gather the evidence to justify a decision taken behind closed doors a long time ago. This is despite huge opposition from numerous parties, including nationally established environment and transport groups, other expert organisations and local residents.

To be viable options B and C require a major new road linking Mortimers Lane in Fair Oak to Allbrook Way en route to Junction 12 of the M3 which, far from alleviating congestion, would make things worse.  Much has been written about the effect that this road would have on ancient woodland north of Bishopstoke and on the River Itchen, but it would also have a hugely detrimental impact on the village of Allbrook.

I have sketched the route of the proposed new road in red on the plan of Allbrook parish above. The precise route has yet to be finalised, but options are limited to avoid protected areas and minimise impact on existing properties.

It can be seen that many properties at the lower end of Pitmore Road would be demolished north of the present mini-roundabout linking Allbrook Hill, Pitmore Road, and Highbridge Road. The road would then traverse the area of open land east of Allbrook Way before joining it. This location is already designated for about 95 houses as identified in EBC Development Proposals 6.4.81 under Policy AL.1 – an area of about 7.7 Hectares.

Due to the steepness of the land in the way of the new road, extensive grading and excavation would be required to reduce this gradient – otherwise it would exceed the maximum permitted gradient for a main road. An enormous cutting would result, causing massive division of the village of Allbrook. Meanwhile, the adverse drainage issues would exacerbate flooding risks lower down.

The fact that the new road would have to pass under the existing, very low Allbrook railway arch is further evidence that this is a ludicrous plan! Although the Highbridge Road approach to the arch (from the east) would be straightened to improve sight lines, this would still mean that a major new road, destined to carry vastly increased HGV traffic, would be routed under a rail arch (E1/196 BML1) that has a clearance of just 3.7 metres (12’ 1”). Indeed, it is well known that this arch been the recipient of NUMEROUS ‘bridge strikes’ extending back years!

Increased traffic would only add to the risk of strikes, and with rising traffic speeds likely to exacerbate the problem further, the spectre of extensive damage to the arch and disruption to the main London rail line running overhead, is a real one.

I identify a purely Allbrook perspective here. The negative effect on irreplaceable ancient woodland north of Bishopstoke and heavily protected areas in River Itchen Special Area of Conservation only add to the completely unacceptable nature of options B and C in the emerging Local Plan.

Your ticket for the: Emerging Eastleigh Local Plan – An Allbrook Perspective