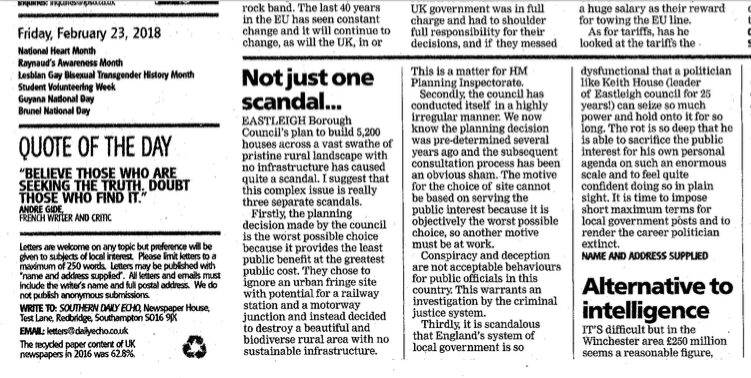 Letter to the Daily Echo, 23 February 2018: The letter above, about Eastleigh’s Local Plan, appeared in the Echo today. Under the heading “Not just one scandal…”, it reads:

“EASTLEIGH Borough Council’s plan to build 5,200 houses across a vast swathe of pristine rural landscape with no infrastructure has caused quite a scandal. I suggest that this complex issue is really three separate scandals.

Firstly, the planning decision made by the council is the worst possible choice because it provides the least public benefit at the greatest public cost. They chose to ignore an urban fringe site with potential for a railway station and a motorway junction and instead decided to destroy a beautiful and biodiverse rural area with no sustainable infrastructure. This is a matter for HM Planning Inspectorate.

Secondly, the council has conducted itself in a highly irregular manner. We now know the planning decision was pre-determined several years ago and the subsequent consultation process has been an obvious sham. The motive for the choice of site cannot be based on serving the public interest because it is objectively the worst possible choice, so another motive must be at work.

Conspiracy and deception are not acceptable behaviours for public officials in this country. This warrants an investigation by the criminal justice system.

Thirdly, it is scandalous that England’s system of local government is so dysfunctional that a politician like Keith House (leader of Eastleigh council for 25 years!) can seize so much power and hold onto it for so long. The rot is so deep that he is able to sacrifice the public interest for his own personal agenda on such an enormous scale and to feel quite confident doing so in plain sight. It is time to impose short maximum terms for local government posts and to render the career politician extinct.”

Your ticket for the: Eastleigh’s Local Plan: “Not just one scandal…”