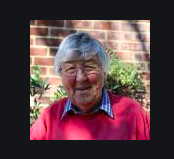 ADD UPDATE, 5 April 2021: We were deeply saddened to learn recently that Graham Mole, a passionate supporter of ADD and a resident of Bishopstoke, had passed away. A former TV producer who later became a respected angling journalist, Graham was a member of our media group, where his ideas and commitment made a valuable contribution to our work.

“Graham was such a great contributor to the ADD campaign, bringing his journalism skills, experience, address book, ideas and an amazing amount of enthusiasm to fighting options B and C,” says local councillor Gin Tidridge. “I was always struck by his genuine passion for saving the Itchen and woods from the damage the development would have caused.”

The one big consolation is that Graham (like Martin Larkin, another great ADD supporter who died last year) lived long enough to witness the campaign’s success. We know that this gave him great satisfaction. Everyone at ADD offers heart-felt condolences to his widow Annie and the rest of his family.

Your ticket for the: Graham Mole – an appreciation