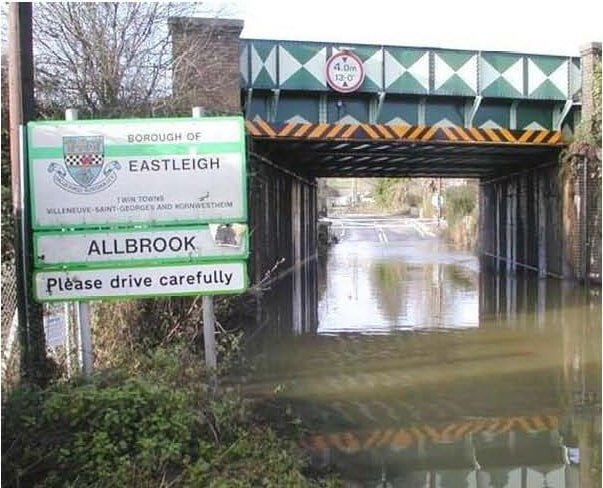 As supporters of ADD are aware, if Eastleigh Borough Council proceed with options B and C for its Local Plan, it will build a new North Bishopstoke link road from Mortimers Lane in the east towards the M3 in the west, squeezing under the Allbrook railway bridge along the way. With the Plan’s 6,000+ new houses creating an estimated 30,000 more daily car journeys, this bridge is clearly too narrow, too low, and too prone to flooding to cope (it even causes serious traffic jams today). With no plans to do anything about it, this bridge is one factor making a mockery of the viability of options B and C.

Newly available transcripts of recent meetings with EBC councillors, including Leader Keith House, demonstrate that councillors too are concerned about this bridge, and far from clear how this problem would be resolved should they favour options B and C.

At the Council meeting on 21 July 2016, Councillor Paul Bicknell, Liberal Democrat Councillor for Eastleigh South, said: “I happen to be a train driver and I go up and down past [the] Allbrook [bridge] and I’ve yet to work out, as I go past, how on earth you’re going to bore a tunnel underneath!”

At the same meeting, speaking about the wider problems associated with options B and C, Councillor Anne Winstanley, Liberal Democrat Councillor for Bishopstoke West, and Deputy Leader of the Council, also said: “Are we sure we could get under the railway at Allbrook?”

More recently, at a Winchester Southern Parishes meeting in Bishop’s Waltham on 24 October 2016, Council Leader Keith House seemed very uncertain about the answer. Asked how he was “going to deal with” the problem of the Allbrook bridge, he gave the following unconvincing reply:

“The work that has been going on, and this is not Council work, this is developers’ work, um, the developer promoting the option B and C patches, mainly option B patch, north of Bishopstoke, which is Highwood, have done a package of transport work, which they worked alongside Hampshire County Council as highway authority, who believe they can solve all those issues, technically.

“Now, I’m not an engineer, so I don’t understand all the detail, but they believe that a route can be made to work as far as the issues around the railway line are concerned, and that solution beyond getting to the railway bridge is then to swivel behind Allbrook, with a new road that leads up onto the link road to Junction 12, rather than taking traffic into Allbrook.”

Asked about the propensity for the bridge to flood, House replied: “My understanding and, as I say, we are finalising the transport work at the moment, is that the County Council as highway authority don’t believe there are showstoppers with that route. I don’t pretend to understand the techniques behind it, but that is my understanding.”

Should EBC take the disastrous decision to proceed with options B and C, let’s hope Keith House, and all his councillors, fully understand how they are going to deal with this problem! Otherwise, on their heads be the resulting catastrophic traffic congestion for the area!

Your ticket for the: Councillors raise questions about Allbrook bridge, answers unclear