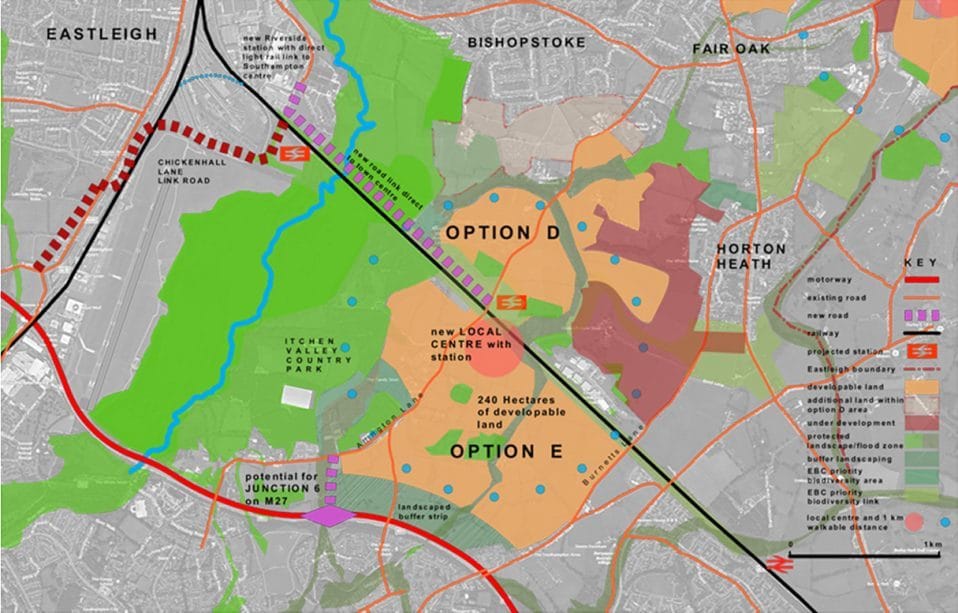 ADD UPDATE, 1 November 2016: Strengthening the case for options D and E of Eastleigh Borough Council (EBC)’s Local Plan (see map above) is the Solent Local Enterprise Partnership’s Solent Strategic Transport Investment Plan published in May this year.  This Plan proposes a new light rail network from the centre of Southampton, through Southampton Parkway station to Fareham.

The plans show stations at Eastleigh Riverside and another central to the area of options D and E at Allington Lane.  This network would allow direct public transport for journeys to Eastleigh, Southampton and Portsmouth, and would link to the rail and air network for longer journeys.  This would do much to mitigate the increased traffic caused by the building of 6,000+ houses and would create tremendous opportunities for business growth in the area.  Options B and C, which are isolated from any public transport options, would offer no such advantages.

Past experience of new train stations in the area show how successful a new station at Allington Lane might be: Chandlers Ford Station, originally built in 1847 but closed in 1969, which cost £2.8 million to reopen in 2003, now serves a quarter of a million passengers a year. Similarly, Hedge End station, which was opened in 1990 to link that area to Eastleigh and Portsmouth, serves the extensive housing developments in that area and is now used by half a million passengers per year.

There are many reasons why options D and E are better than options B and C, the potential for a new station at Allington Lane being just one of them.  Let’s hope Eastleigh’s councillors see sense and favour the right options when they decide upon our future in December!

Your ticket for the: ADD UPDATE: Plan for new station at Allington Lane strengthens case for D and E