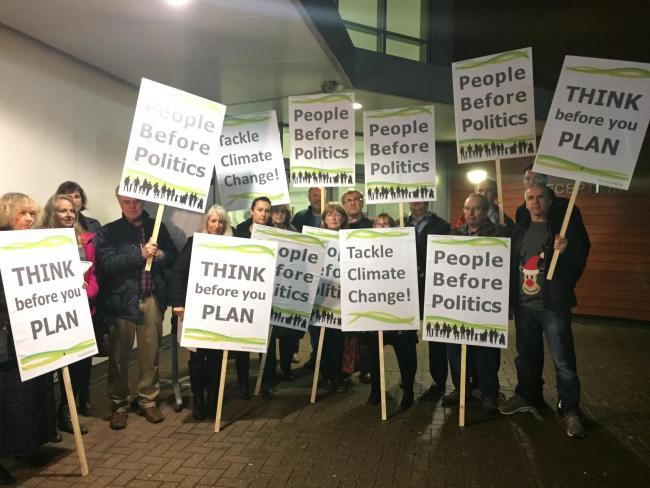 John Lauwerys, presentation to Eastleigh Borough Council, 15 December 2016: Over the coming months leading to the draft local plan in May 2017, you have collectively the awesome responsibility of determining forever the future physical character of the borough.  The paper on the two strategic growth options show either could make the biggest contribution to delivering the additional housing required by 2036.  The SWOT analysis shows there are many more weaknesses and threats in the case of options B and C (in Allbrook, Bishopstoke and Fair Oak) compared to D and E (around Allington Lane).  The report makes clear further investigation is required before any decision can be reached on which to include in the draft Local Plan which must be evidence based if the council is to avoid its plan again being rejected by the Planning Inspector.

However, you are asked to agree the extraordinary recommendation this evening that even before supporting evidence is available, a clear preference should be expressed by the council for options B and C.  Why is the highly experienced leader of the council and his cabinet making this surprising proposal?  Keith House is a gifted salaried full time politician who has led Eastleigh Borough Council with distinction for 22 years so would not propose this course of action without good reason.

He says it is primarily because options B and C would enable the building of the North Bishopstoke Link Road which would relieve traffic congestion in Eastleigh.  He also says that the borough will borrow the necessary funds to deliver this road ‘upfront’, recovering the cost from the developers of the 6,200 houses. He does not admit to the financial risk this involves.  He also dismisses options D and E because he says that without the delivery of the Chickenhall Lane Link Road, the traffic from development in Allington Lane could not be managed.  However, none of the expert traffic studies completed to date support any of these contentions.

Another suggestion has been made as to why the leader favours options B and C, the most beautiful and environmentally sensitive areas remaining in the borough which could together deliver all of the balance of houses needed by 2036.  Namely that development in these areas might incur less opposition from potential Lib Dem voters than building elsewhere in Eastleigh. It would be outrageous if the future character of the whole borough were to be determined by party political interests and I am sure Lib Dem councillors will not allow this to be seen to be the case.

Surely the borough which regards environmental concerns as a priority would not want to choose the strategic option which will generate 30,000 extra traffic movements per day? Rather should it not press for a new station to be built at Allington Lane and support in every way the proposed Solent Metro Link which could serve development in the options D and E areas? That really is about giving meaning to the council’s slogan ‘Tackling Climate Change’.

The choice of which strategic option to include in the new Local Plan must be on the basis of sustainability.  Only the completion of the further studies identified in your report will provide the vital evidence you need.  Tonight is not the time to make an ill-judged premature decision.

Your ticket for the: Local resident reminds EBC of “awesome responsibility” over Local Plan