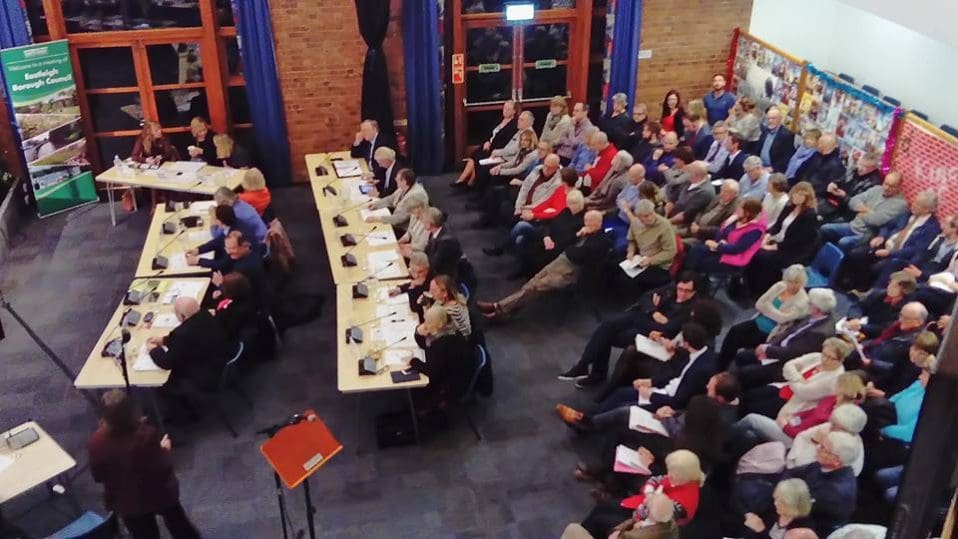 However I’m not just here to tell you about your lovely local national park and how you mustn’t build anywhere near it.

We are realists and know that you have some hard choices to make.  Equally we know you will do your neighbours the natural courtesy of making sure that the decision you take is the best possible one given all the evidence available, and we welcome [Leader of Eastleigh Borough Council] Keith House’s words on this.

Hard choices indeed between a development that is strung out along a road [options B and C in Allbrook, Bishopstoke and Fair Oak] or one that is centred around a railway station [options D and E in Allington Lane].  Which is better for the planet?

Or a development which is on the fringe of the borough remote from the town centre [B/C], or one that links easily into the town centre and supports and re-inforces it [D/E].  Which is better for Eastleigh?

I have to say we are mystified by the report before you today.  On the one hand it provides (with some omissions) a preliminary and fair SWOT analysis of each of the schemes, and stresses the amount of work there is to do to develop this.  Options B and C are identified as being the highest risk option, with Allington Lane (which you identified 15 years ago this month as being the only acceptable location for a major greenfield development in the borough) scoring only one threat as against four for B and C.  Yet it then leaps to the conclusion in the recommendations before you that you should forge ahead with B/C and dismiss D/E.  There seems no logic to this.

Obviously B and C dangles the carrot of a possible answer to congestion problems in the shape of the North Bishopstoke relief road.  However for a road-based proposal there is, astonishingly to us, no traffic study work that backs this up.  What little evidence there is, Hampshire’s preliminary strategic traffic study done a year ago, is very noncommittal.  There is no work yet done on the impact of these houses on the narrow lanes to the north and east of them.

When Keith House met with us two months ago [at a Winchester Southern Parishes meeting in Bishop’s Waltham on 24 October 2016], he was very clear that this road would need to be built by Eastleigh ahead of any development.  He is absolutely right about that, as to do otherwise would be to condemn Fair Oak and Bishopstoke to 20 years of traffic misery as the fields between Upham and Fair Oak fill with houses.  Even if the road does provides relief, a 95% complete relief road is no relief road at all.  Yet even assuming it were technically possible this is a huge financial decision. The £31 million budget from the county doesn’t cover a long length of road, any works to the infamous Allbrook railway bridge nor anything to cover Network Rail’s potential request for a ransom payment.  Have you debated how this cost, which could comfortably exceed £50 million, is to be paid for?  Would the money be better spent elsewhere?

So, with so many risks hanging over B and C and so much work to do to find out more about them, we would urge you to consider again your paper’s recommendation 3 and put both options on a level playing field.

So whats the rush?  Why leap into a decision before you have to and before you know the full facts?  Keith House has said this evening that you need to take your time.

We would urge you to do your due diligence, as you said you would in July [at the last full council meeting on 21 July 2016], before you narrow down your options.  To do otherwise risks having your plan thrown out a second time as being unsound.  This would just create a developers’ free for all, bad for you as councillors, bad for us as your neighbours and a disaster for the whole borough.

Your ticket for the: Parish council chairman urges EBC to do full diligence on Local Plan