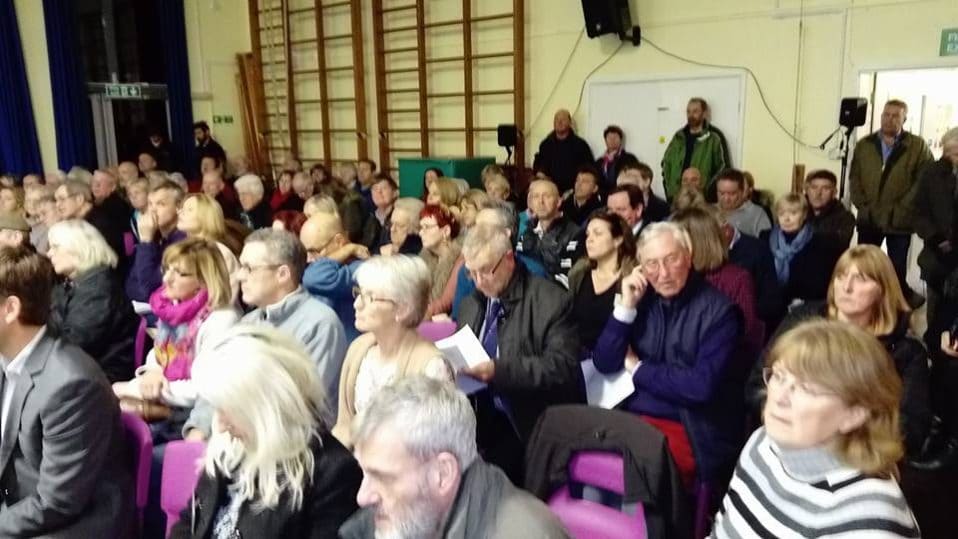 PEMBERS HILL FARM DECISION, 26 January 2017: It was very nearly a full house at Stoke Park Junior school yesterday evening, with around 100 people looking to see whether Eastleigh councillors from the Bishopstoke, Fair Oak and Horton Heath Local Area Committee would stand up for their communities.

Chairman Trevor Mignot started the evening by telling everyone that the decision on Drew Smith’s application for 250 houses at Pembers Hill Farm was not about options B and C (of Eastleigh’s Local Plan) and the application had to be seen as a standalone decision.  He warned speakers from the public (all of eight whom were against the application) to avoid raising the merits of B and C.

Planning Officer Dawn Errington opened the item with a long explanation as to why the scheme had to be approved as it complied with the National Planning Policy Framework (NPPF).

The eight passionate and well-argued speeches from the floor drew loud applause and cheering from the audience.

After the planning agent’s predictable speech, Councillor Des Scott started his speech by saying “this application is premature” (to huge applause from the audience).

He then went on to explain why he had to support ‘approval’ as “we are handcuffed by the NPPF” and “if we don’t grant this it will go to appeal.  We have got to defend applications we know we can win. We can’t win this one.”

This set the tone (had they been agreeing this at the pre-meeting?).  One by one councillors expressed regret but said they would vote in support.

Councillor Anne Winstanley was more unapologetic and said “we need to get back to building houses so I will be voting for the application.”

Councillor Rob Rushton said: “I understand the need for housing and we need to go by planning law. We would lose this on appeal.  I’m reluctant but I will be voting in favour.”

He then proposed the motion, which was seconded by Anne Winstanley and carried unanimously.

The lack of recognition by the councillors and planning officer of the area’s traffic problem was, amongst other things, extremely noticeable – an omission that will infuriate all those already caught in the area’s traffic chaos.  More houses will, of course, only make the problem worse but perhaps the councillors and planners feel they have no responsibility for it?

What’s clear is that Eastleigh councillors are not listening to their electorate or, if they are, they are choosing to ignore us.  In a democracy, this only ends one way!  We may have lost last night’s vote, but we fight on – more determined that ever before.

Your ticket for the: Eastleigh councillors ignore locals and vote for Pembers development