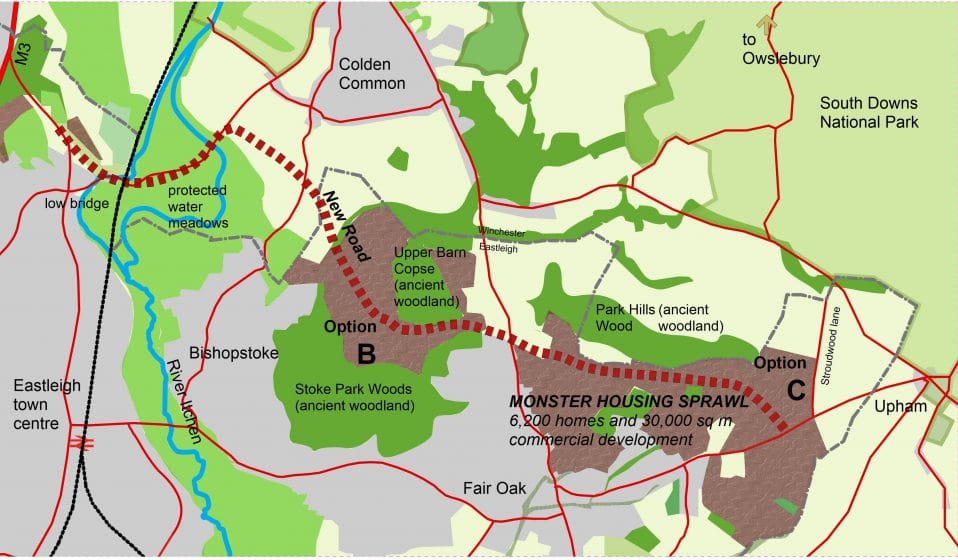 ADD UPDATE, 4 July 2017: As Eastleigh Borough Council (EBC) considers its plans for a monster housing sprawl and a major new road north of Bishopstoke and Fair Oak (options B and C of its emerging Local Plan – see map above), one of the key pieces of research it has yet to complete is the plans’ effect on traffic flows. At the moment, EBC cannot make statements that the proposed new road will ease congestion or alleviate future increased traffic based on anything other than conjecture. It is likely to be Hampshire County Council that does this work, but EBC will commission it. As we all know, public transport would be limited to say the least: double-decker buses would not be able to get under the railway bridge at Allbrook and there is no railway line in options B or C.

In the meantime, ADD campaigners have been doing their own modelling – in fact anyone with access to online mapping can do so! The new road is expected to cross Winchester Road at the Fox and Hounds, join Highbridge Road, then run behind Allbrook to J12 of the M3.

For people thinking of moving into a new home on the Pembers Hill Farm site (recently signed off by a Local Area Committee in advance of the Local Plan and the first part of option C to reach the planners), here are the routes to places they might want to travel (assuming options B and C go ahead) and an assessment of whether they are likely to use the proposed new road.

Work: based on some of the area’s biggest employers

Conclusion: to avoid adding to congestion on current roads, all residents would have to work in Chandlers Ford, Hursley, Nursling area – or Bournemouth.

Conclusion: the new road would only help with trips to Southampton General.

ADD’s conclusion is that the new road would substantially fail to deal with the increase in traffic resulting from the new housing.  Yes, it would be used for some journeys but it is unlikely to be the route for most trips – so congestion would continue to increase at current pinch points, and air quality would continue to be a problem.

Pressure would increase on Allington Lane, Botley Road and Bishopstoke Road with congestion likely to grow in Eastleigh, Hedge End, Fair Oak, Bishopstoke, Colden Common and Twyford.  Rat-running through country lanes would be likely to increase.

Talking to residents in Bishopstoke and Fair Oak, it seems that the road would be of even less utility to the current community.  The Campaign to Protect Rural England (CPRE) has a fascinating report on how road schemes often fail to deliver intended reductions in congestion.

We find it hard to make the case that EBC’s planned new road will alleviate Eastleigh’s current or future congestion.

Your ticket for the: Eastleigh’s Local Plan and the new road to nowhere – DIY traffic modelling