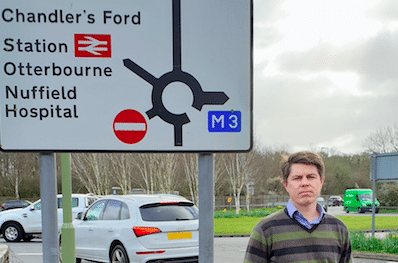 As part of our virtual hustings, Daniel Newcombe, Conservative candidate for Chander’s Ford on Eastleigh Borough Council, has sent us the following message:

“One of the reasons I got into local politics was to fight the ever-increasing amount of traffic on Chandler’s Ford’s roads. It affects our local communities’ lives in many ways, whether it’s sitting in queues of traffic to get to work each morning, having to cross busy dangerous roads to take our children to school, or simply by breathing in polluted air which is known to cause significant health issues. Due to its proximity to the M3, Chandler’s Ford has felt the brunt of developments to the West in recent years. So, after carefully reading all the evidence supporting Eastleigh’s draft Local Plan, I decided to strongly object to it and try to prevent further traffic chaos within our own borough before it happens.

The proposed development of at least 5,300 homes will actually include around 2,000 more houses than the borough needs, however this number is required by EBC to provide funding for a new link road that will funnel residents across much beautiful countryside and straight to Junction 12 of the M3, next to Chandler’s Ford. This ‘bypass’ is expected to create an extra 26,000 daily traffic movements heading straight towards our community. The Transport Assessment, which was commissioned by EBC, forecasts that the new developments will increase traffic delays by 6 % across the whole borough, however in Chandler’s Ford, due to this link road, traffic delays will increase by 40%! Despite the new developments being several miles away, Chandler’s Ford (including Hiltingbury) is forecast to be the second worst affected community in the entire borough.

The other important reasons I am against the Plan include:

Thank you for reading this and for the opportunity to share my views. Please vote for me on 2 May!”