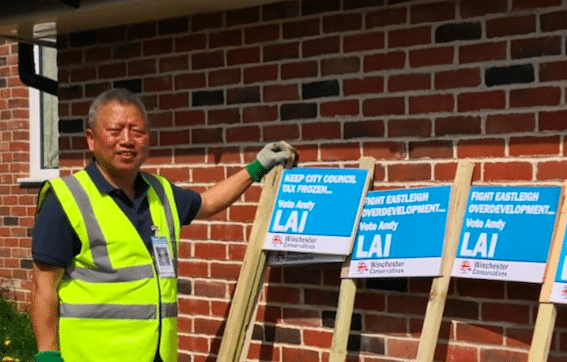 As part of our virtual hustings, Andy Lai, Conservative candidate for Colden Common and Twyford on Winchester City Council has sent us the following message:

“I would like to make my opposition to the EBC’s Local Plan clear – it cannot be redeemed. I aim to provide a fresh perspective on this issue. I believe that, having served as a police officer for 33 years in both the urban metropolis of Hong Kong and the quiet countryside of Hampshire, I am uniquely qualified to furnish residents with a standpoint on overdevelopment.

City experience is invaluable in this scenario – one knows of the air pollution, constant background noise and the lack of wildlife within a country mile of the place. Building around 5,500 houses will not turn Eastleigh into a bustling megacity but, as a former resident of one, I can say that similar issues to the ones mentioned above will be introduced if the Plan goes through.

The design process for this Plan has been flawed from the start – major issues identified by expert bodies, such as transport and wildlife considerations, were simply ignored by the Lib Dem council, while problems like noise pollution during and after the construction period, along with the need for extra emergency services support were conspicuously missing from debates leading up to the vote. As a potential councillor for Colden Common and Twyford, I am especially conscious of these matters, as my ward is one of the major areas being affected by this Plan.

Supporters of this Plan may not have been dissuaded by my reasons so far, but what if we draw comparisons to other, similar, development plans in nearby areas? Take the Stoneham Park project for example: it promises 1,100 houses, supported by a nursery and school, as well as local stores. However, recent news suggests this project has been drastically slowed. It seems to me there is little demand or support for EBC’s far larger Plan.

Needless to say the EBC’s Plan will definitely have a negative impact the South Downs National Park nearby.

As a councillor, I will do what is necessary to wholeheartedly oppose the Plan. There is only one word suitable to describe it: preposterous.”