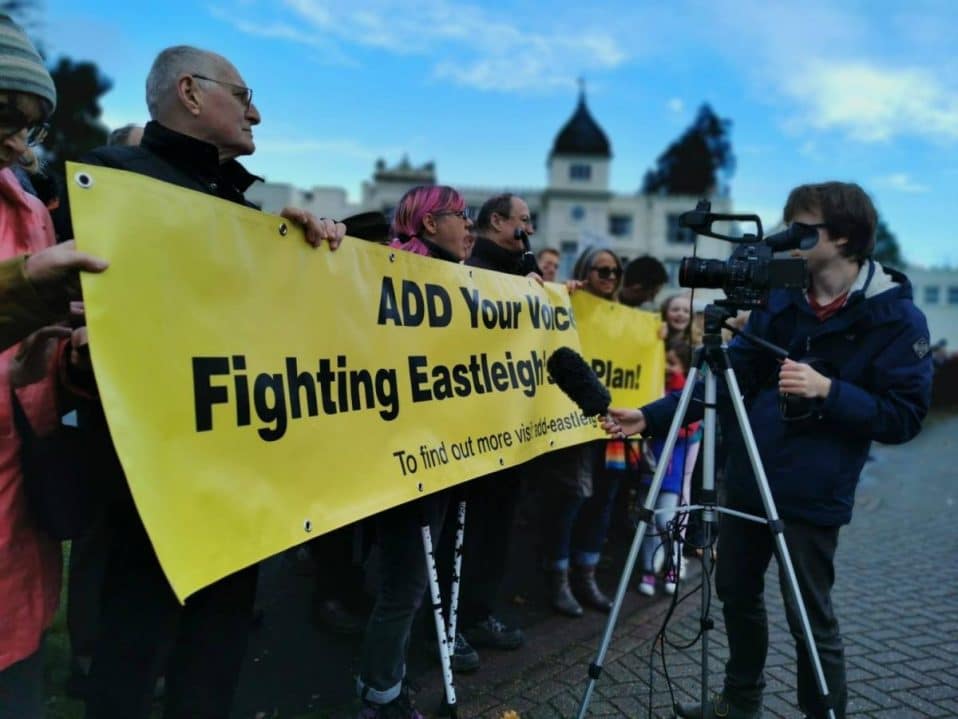 ADD UPDATE, 8 December 2019: The Planning Inspector’s examination of the Eastleigh Local Plan has now adjourned until 8 January 2020. ADD would like to thank the hundreds of people who demonstrated at the Botleigh Grange Hotel to show their support on 22 November. It was a great turnout when you consider the difficult timing (8.30am on Friday), the lack of parking space and the lousy weather. There was considerable media interest with both main local TV channels, Radio Solent, Wave 105, the Daily Echo, Hampshire Chronicle and Eastleigh News providing coverage.

Turning to the examination itself, it has been an intense couple of weeks for ADD and our advisers, but we feel we have made our case effectively. Christa Masters, the Planning Inspector, has listened carefully to the many people presenting their critical views of the Plan.

She can be congratulated for her thorough knowledge of all the mountains of papers relating to the Plan, her control of the examination and attention to detail in the way she takes Eastleigh Borough Council to task over their responses. There have been some interestingly long silences as Eastleigh scrabble around for answers to her calm but keen questioning.

ADD’s barrister and planning consultants have been incisive in their probing of Eastleigh’s evidence and the reasons why the two options (B/C and Allington Lane) have not been properly compared. In this they have been ably abetted by Caroline Dibden of the Campaign to Protect Rural England and ADD chair John Lauwerys.

We were especially pleased that Professor David Sear of Southampton University could testify to the damage that the development would in his view cause the River Itchen, a direct contradiction of the case presented by Eastleigh. He is a world expert on chalk streams, and his evidence will be particularly hard to counter.

The Inspector will have several months after the end of January to reach her conclusions on the soundness of Eastleigh’s Plan, so it is of course far too early to have any sense of her decision. However, we believe we are putting up a strong case. We are, of course, hugely grateful to ADD’s supporters whose financial contributions have made it possible to acquire the necessary professional support.

The examination reopens at 9.30am on 8 January at the Botleigh Grange Hotel (details here). Members of the public who wish to attend are free to do so.

In the meantime, we wish all our supporters a very Happy Christmas and New Year.

Your ticket for the: Update on Planning Inspector’s examination of Eastleigh’s Local Plan