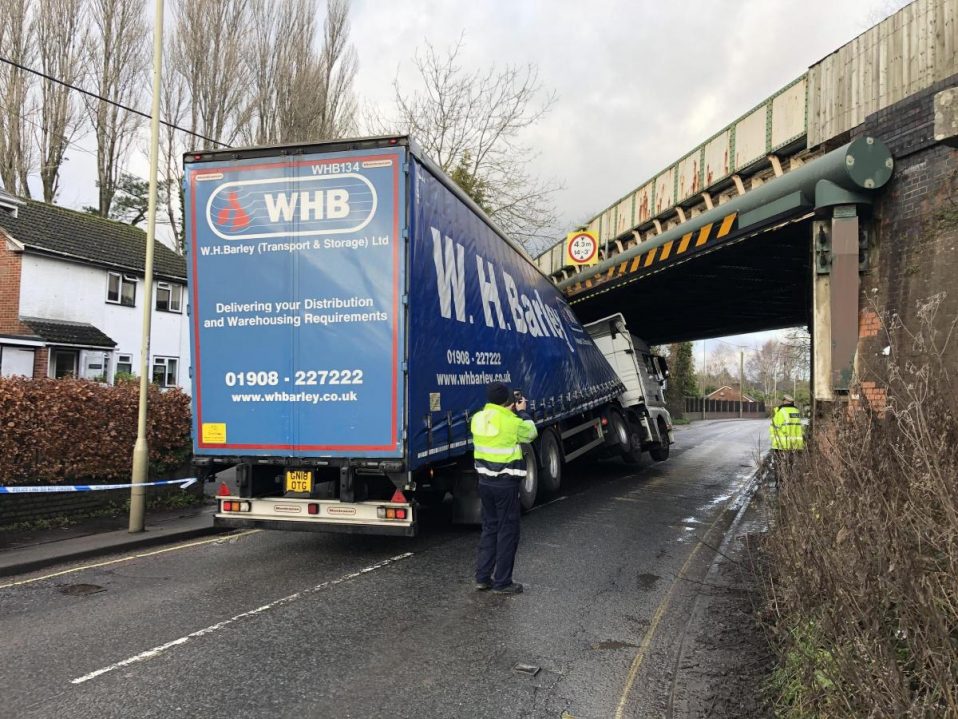 ADD UPDATE, 5 January 2020: As reported in the Romsey Advertiser last month, Romsey residents have been “venting their anger” as HGVs continue to crash into a low railway bridge in Greatbridge Road. This happened twice in December alone (see a picture from 11 December above), taking the tally to 22 times in the last 15 years.

As ADD supporters know, we have our own problems with a low railway bridge at Allbrook, which has itself been struck by five HGVs in the last three years. Eastleigh Borough Council (EBC) now want to build 5,300 new houses, and 30,000m2 of employment development, on land to the east of Allbrook, the main access road for which will end up going under the Allbrook bridge. Indeed, by EBC’s own calculations (which we believe are underestimates), this development will lead to 30% more HGVs passing under the Allbrook bridge by 2036.

As part of its Local Plan, EBC say that they will lower the road under the Allbrook bridge to ease lorry traffic but even with these alterations (which will increase the effective headroom under the bridge by 15cm to 3.85m), the height will still be way less than the 4.3m clearance of the clearly inadequate Romsey bridge. Meanwhile, as we all know, the Allbrook bridge floods badly, so lowering the road will hardly help solve this problem either. Can Eastleigh’s proposal really be a sustainable one?

Christa Masters, the Planning Inspector currently examining Eastleigh’s Local Plan, will restart her hearings next week. The hearing on Wednesday (8 January) will focus on ‘transport, infrastructure and delivery’. Expect the Allbrook railway bridge to feature!

Your ticket for the: Eastleigh’s plans to adjust the level under Allbrook railway bridge won’t be enough – just ask Romsey!