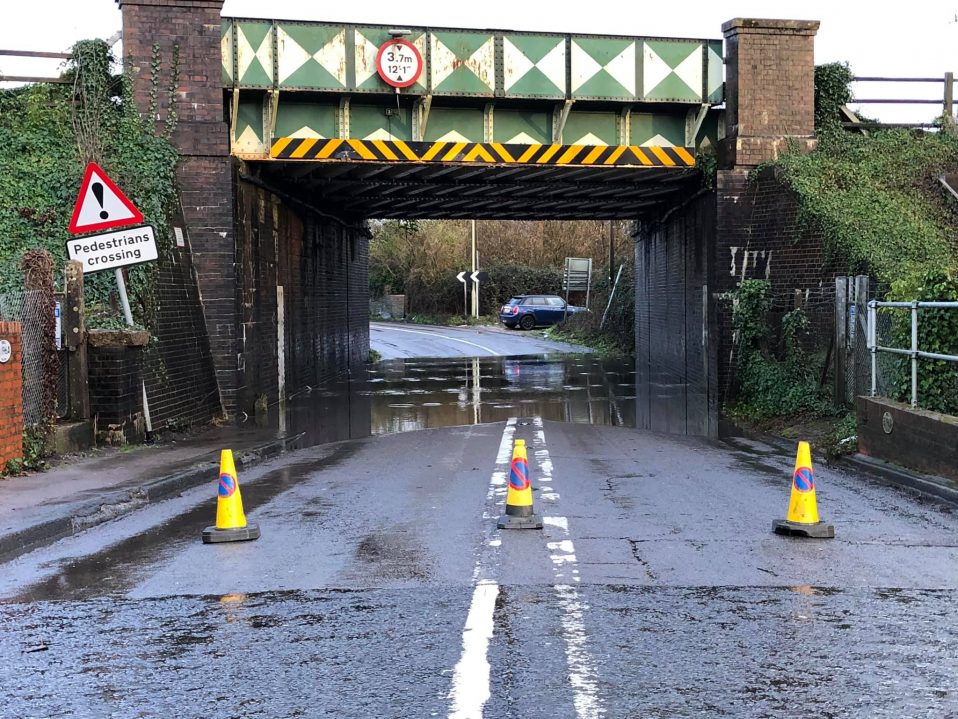 ADD UPDATE, 17 February 2020: It’s now 19 days since the Planning Inspector completed her examination of Eastleigh Borough Council (EBC)’s Local Plan. She is now considering the evidence before reaching her preliminary conclusion, due soon.

In the meantime, the realities on the ground are clear for everyone to see. In the recent storm, for example, the road under the railway bridge at Allbrook, which is the key access route to and from the proposed estate of 5,300 houses, flooded yet again. This time police decided to close the road (see image above), stating: “Please be aware that Highbridge Road has now been closed (under the railway bridge at the bottom of Allbrook Hill) and no vehicles will be allowed through. The decision has been made for the interest of Public Safety and the likelihood of vehicles becoming stranded while trying to navigate the flooding.”

Comments on social media reflect what we have been saying to EBC since the idea of its preposterous estate was first mooted over four years ago. One person wrote: “Wow, houses planned over there and that bit of road is going to be the main access route – another well thought out plan by the council!!!!” Another said: “Not sure any thought has been given to this all too familiar situation here!” Meanwhile a third wrote succinctly: “Mother Nature (and Eastleigh Police) pass judgement on EBC’s Local Plan!” Quite.

Thousands of local people and many local and national organisations are against Eastleigh’s Plan, for numerous reasons. ADD has been working with them – day in, day out – to ensure it never flies. As judgement day approaches, we hope more than ever that the Planning Inspector will agree. We will keep you posted!

Your ticket for the: Yet more flooding causes Eastleigh police to close proposed access route for 5,300 new houses