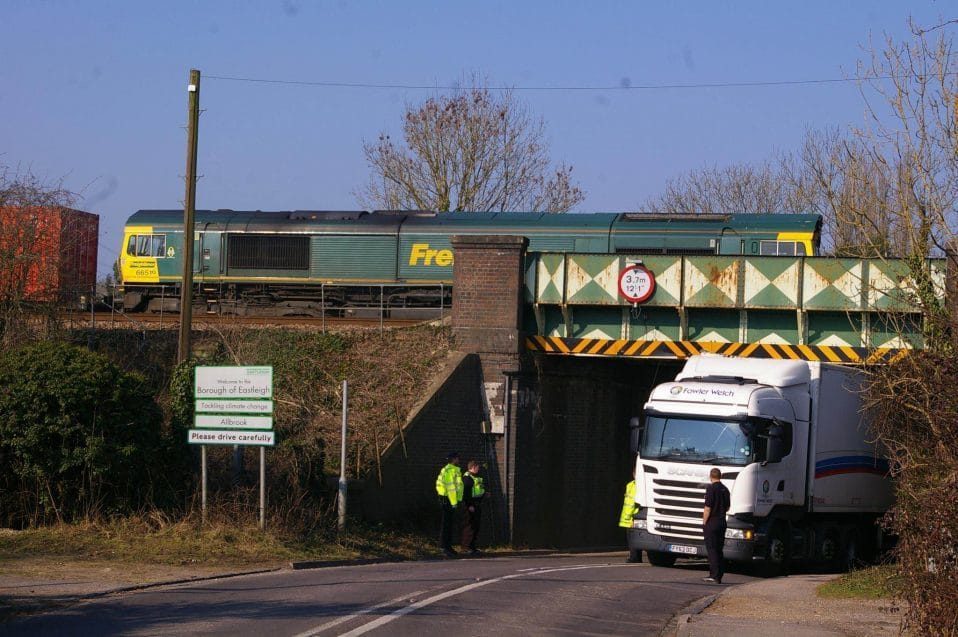 ADD UPDATE, 9 July 2017: Less than two weeks before Eastleigh Borough Council (EBC) makes a key decision on a massive 6,200 housing development, it has been hit by a double whammy. Problems are piling up one after another. In one case, Network Rail wants a ransom of millions of pounds for improving a road under a deathtrap bridge. And Southern Water has now admitted it would have to find alternative supplies if the scheme goes ahead. If it can’t find them then the scheme is, literally, dead in the water.

In the case of the bridge, EBC has been warned by Network Rail that trying to squeeze a new road under a very old road bridge could cost lives. In recent years, lorries have hit the bridge no less than 18 times. Fixing it could also cost the council millions of pounds because Network Rail will only allow improvements to be made to the bridge to accommodate the huge housing development if it gets a share of the developers’ profits. It’s demanding a share of the uplift in value from agricultural to residential land. And, say experts, that could cost so many millions that it would make the whole scheme unviable. And as if that wasn’t enough, the council has already been warned by an MEP that if the planned new road damages the River Itchen’s floodplain then the UK could be taken to court and fined many millions of euros.

In an official statement that now confirms the dangers, Network Rail said: “This bridge is already prone to bridge strikes, with 18 recorded since 2008, and an increase in the volume of traffic would increase the risk of such incidents. Bridge strikes not only present a safety risk to road users and pedestrians, they also delay thousands of rail passengers and cost the taxpayer significant amounts of money. In addition, an increase in the volume of traffic may require changes to the road and bridge in order for it to be compliant with safety standards designed to protect road users and pedestrians, and generally to reduce the risk of bridge strikes should a housing development of this scale proceed.”

One solution being considered is to ban HGVs from the bridge, together with pedestrians. But that would divert even more heavy traffic onto near roads and increase congestion. And all this even if engineers found a way of squeezing the new road between protected ancient woodlands.

And now even EBC admits the scheme could have vast funding problems. A council statement confirms Network Rail “are under a best-value obligation from the Department for Transport to ensure that any rights granted (or other related work needed to enable the scheme) are appropriately valued and take into account the uplift in land value (from agricultural to residential) that such works will unlock. The value secured by Network Rail in that scenario would then be reinvested back into the railway network. This could result in a significant value being due to Network Rail which could significantly impact upon the viability of the development option.”

But apart from money problems there is now a new question: how to supply thousands of new residents with water. The Environment Agency (EA) has ordered Southern Water to drastically reduce the amount of water it takes from both the Test and the Itchen. The EA is forced to restrict how much water is taken from the rivers because of the EU Habitats Directive which has ruled that the rivers are not up to par. The decision will be finally made by a public inquiry next year. But in the meantime the water company has admitted: “We will consider all the options (including desalination, water recycling and transfers from neighbouring water companies) for the alternative new supplies we need and how long it will take to implement these schemes.”

EBC is due to make a key decision about the plan at a public meeting on 20 July (7pm at Kings Community Church, Upper Northam Road, Hedge End, Southampton, SO30 4BZ) when hundreds of protestors are due to attend. More details on this meeting can be found here. We look forward to seeing you there!

Your ticket for the: Eastleigh’s monster housing plan hit by rail and water double whammy