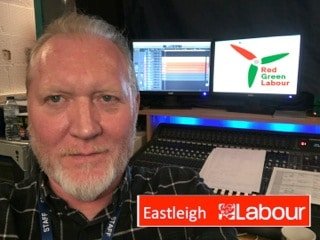 ADD UPDATE, 26 April 2019: Ahead of the local elections on Thursday 2 May, Action against Destructive Development (ADD) has invited each candidate standing for Eastleigh Borough Council (EBC), and each candidate standing for Winchester City Council, to supply us with up to 350 words on their views on EBC’s draft Local Plan and its progress. The same invitation was extended to candidates in the parish/town council elections in our area.

As part of our virtual hustings, Gordon Clark, Labour candidate for Eastleigh South on Eastleigh Borough Council, has sent us the following message:

“We can’t escape the need to build new homes for the growing population of Eastleigh and its surrounding areas, but the proposals put forward by Eastleigh Borough Council do not take into consideration the impact it will have on our environment. The number of dwellings proposed will add too much traffic to our already strained roads and tip our air quality into unacceptable levels. The council’s report on air quality from 2018 warned that the area couldn’t cope with more than 2,000 new homes in the area and this proposal is for more than 5,000. It’s not just the increase in private cars, but the extra lorries supplying more goods to shops and supermarkets. Our water and sewage systems will also be strained as will our schools and doctors’ surgeries.

The majority of these houses won’t even be affordable for Eastleigh residents in need of their own home. They will however be attractive to people working in London who wish to live in our green and pleasant borough and commute daily, adding more misery to the people already suffering jam packed trains every day. What we really need are zero carbon council houses and flats, close enough to Eastleigh town centre, with good public transport links and green parks with safe play areas for children.

I’m no planning expert, but even I can see the many flaws in the council’s proposals and it’s time the residents of Eastleigh were properly consulted about plans that will affect them and their children in the future.

If I’m elected I will be a small cog in a large Lib Dem controlled council, but I will have the backing of the Labour Party behind me, with all their expertise on housing and environmental issues. I will work to ensure any future plans do not have a negative impact on our beautiful region and any housing plans address the needs of the residents already living in the Eastleigh borough.

Thank you for taking the time to read this and please don’t forget to vote on 2 May. This is all about our quality of life.”