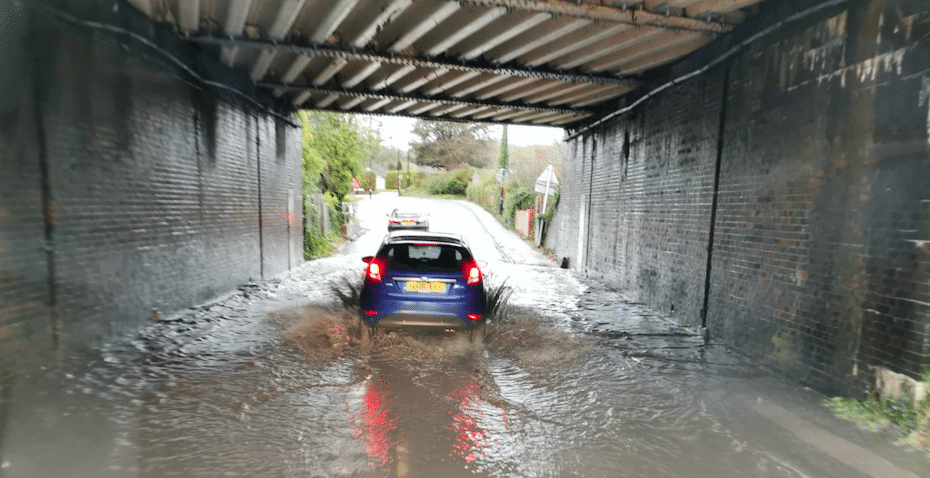 ADD UPDATE, 16 January 2020: The bridge under the railway line at Allbrook has flooded… again. This matters because Eastleigh Borough Council (EBC) want to use this tiny bridge as the principal exit to the M3 for a new estate of 5,300 new houses and 30,000m2 of employment buildings. This proposed development north of Fair Oak and Bishopstoke is central to Eastleigh’s Local Plan, the soundness of which is currently being examined by Christa Masters, the government’s independent Planning Inspector.

Alongside numerous other organisations and individuals against Eastleigh’s Plan, ADD has been representing our thousands of supporters at the Inspector’s examination, which is due to end on 29 January.

There are many reasons against Eastleigh’s proposals, not least that not all the viable alternatives were properly explored.

The Allbrook railway bridge is just one, very visible, reason why it makes no sense. Last week, we reported how the height of the bridge is a major problem for HGVs, which have a habit of striking the top of it. Eastleigh’s plans to raise the headroom by just 15cm by straightening and re-profiling road won’t be enough. Severe problems with a similar bridge in Romsey prove that point.

There is another problem facing this inadequate bridge, namely that in very heavy rainfall, if the pump installation fails or is overwhelmed, the road floods – as it did again yesterday.

As one resident told us: “At around 10am yesterday morning I drove through what I guess was about 9 inches of water under the bridge at Allbrook. While I took photos, one small red car stopped fearing to go through the flood while a lorry driver joked that if it carried on like this he’d need a ferry to get through! My car went through OK although being a hybrid I was a bit concerned about the electrics. It would only take a vehicle’s engine to stall under the bridge for it to block traffic and creating large tailbacks.”

He added: “A friend who phoned last night said there was still water under the bridge in the evening. While it may have been an extreme storm that caused this flood, we will see many more of them with climate change.”

Conservative estimates suggest that the proposed development will generate an additional 25,000 daily vehicle movements, including a 30% increase in HGVs. If these drivers wish to head west, their principal escape route will be under this tiny bridge. Sounds sensible? If the Planning Inspector approves Eastleigh’s proposals, expect long delays.