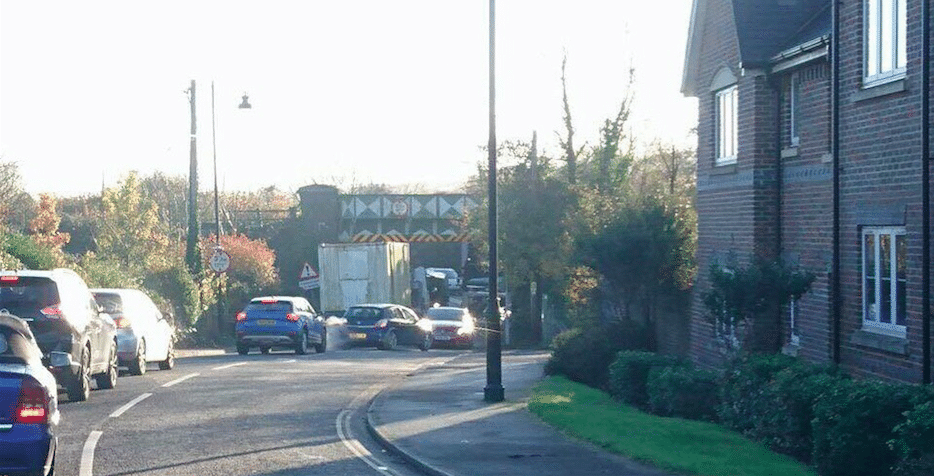 ADD UPDATE, 21 November 2017: On 26 September, Eastleigh Borough Council’s Local Area Committee that covers the town centre agreed to look into limiting HGVs at rush hour and during the night “within the area encompassing Southampton Road from Chestnut Avenue northwards to Twyford Road roundabout and west from the roundabout along Leigh Road and Romsey Road to Passfield Avenue.”

It is great that the Eastleigh LAC, which is made up of borough councillors, wants to address the environmental impact of lorries in the town centre. Concerns about the road surface deteriorating, noise levels and air pollution issues are very relevant to the lives of residents.

ADD would like to highlight to the LAC that, if the link road proposed for the massive new development north of Bishopstoke and Fair Oak goes ahead, it will be unable to alleviate this impact.

Allbrook railway bridge is too low for vehicles over 3.7 metres high and – as such – there have been regular ‘bridge strikes’ over the years that have caused significant damage and confusion. Three days before this committee meeting, for example, two lorries (one pictured here) added to considerable congestion on the B335 as they attempted to pass under the bridge. On 8 October, two more lorries stopped at the bottom of Allbrook Hill whilst they reconsidered their route, blocking the road. On 17 October, another lorry blocked Highbridge Road as it made a multi-point turn to avoid the bridge. And, on 17 November, there was yet another incident with a truck, the photo above showing the resulting traffic issue. If lorries hit the bridge, they potentially jeopardise the main rail line to London.

No plans have been published to replace or raise this bridge if the new road is built, and transport experts consulted by ADD cannot see any way of economically adapting the bridge to address the height issue. Therefore, the new road cannot alleviate the numbers of large lorries trundling through the town centre. To suggest otherwise would be misleading.

If the council opted to replace the bridge, the cost of the road would soar way beyond anything that has been suggested up to now. In addition to the extra construction costs probably totalling well over £10 million, Network Rail would require significant payments. Replacement would be likely to result in delays for rail commuters over many months.

ADD opposes the proposed road for many reasons – not least because it does not offer a solution to Eastleigh’s traffic congestion. The published plans indicate that, due to the bridge, it would be physically incapable of diverting large lorries from Eastleigh town centre.

Your ticket for the: Allbrook bridge: why Eastleigh council’s proposed new road will NOT solve any traffic problems